Negotiation is not a Meeting, but Milestones

by Samuel Dinnar
Negotiation is Not Just One Meeting.

Despite the popular perception that negotiation is a high stakes meeting, business negotiations should be viewed as a campaign of agreements and multiple milestones.

Many entrepreneurial relationships last for a long time and involve many agreements and contracts. Such long-term relationships involve many negotiations, each involving at least one major agreement, and sometimes several agreements that are negotiated both serially and in parallel. Throughout a business relationship, there will typically be many milestones, and many of these milestones will carry specific contractual significance. In fact, every negotiation process has milestones that are internal to the negotiation process.

Let’s look at the typical milestones of an entrepreneurial negotiation: In an initial negotiation exchange, the parties typically agree on one main agenda item, or more likely, a list of agenda items, to discuss. After discussing the agenda, the parties will come up with a short list of main items that they agree on. Agreeing on this list of items signifies their intent to reach an agreement, and since this is typically an intent that is non-committal, it may carry a name such as “Informal Letter of Intent” or informal LOI. The next milestone would be when the parties have negotiated the main terms into a draft “Term Sheet,” or it may be called a draft “Memorandum of Understanding” that will typically include a clause on what level of commitment (to reaching a full agreement) the parties have taken on. 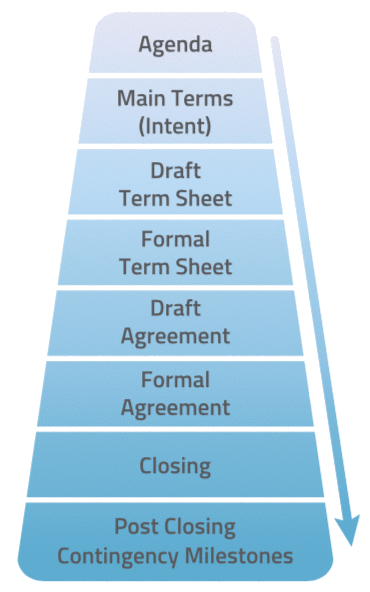 The next milestone involves turning such a draft into a detailed term sheet (or MOU), that is typically signed, and which subsequently serves as the basis for the more detailed negotiation of the full agreement. Reaching a full agreement may likely require the involvement of many more players (and yes, many more lawyers), as well as using some complicated process steps such as large financial transfers, regulatory approvals, and collection of signed exhibits. Typically a detailed agreement will itself include several milestones. First, the parties reach an agreed-upon draft agreement, then they sign the formal agreement, and finally, the deal “closes.”

"Closing” may coincide with signing or may take place at some later date to allow for the completion of all the supporting processes that are required before the agreement formally becomes “effective.” Most agreements will also include in them several post-closing contingency milestones that are part of fulfilling the agreement, or that would trigger other clauses in the agreement.

Negotiations take up a significant portion of most entrepreneurs’ time. They continue through all the long-term relationships that entrepreneurs are part of. They can also spring up quickly and unexpectedly: sometimes as a result of an abrupt external force, or as a result of some neglected “pressure-cooked” internal dynamics. I believe that failed negotiations are at the root of most entrepreneurial failures. Knowing how to prevent a failed negotiation as well as how to recover after one occurs is essential. Having surveyed many entrepreneurs, I know that almost every interaction entrepreneurs face will test their negotiation skills. Those who succeed will prepare properly and keep trying to improve their understanding and skills.